CALCiViS , a new UK company, has been working on an exciting new technology (CALCiViS Imaging System) that will help practitioners precisely identify active carious lesions, allowing them to offer bespoke, evidence-based preventive treatment for dental caries patients. This innovative technology is the next step in true preventive dentistry and uses an advanced biotech based imaging agent to accurately identify active demineralisation on the surface of a patient’s tooth. 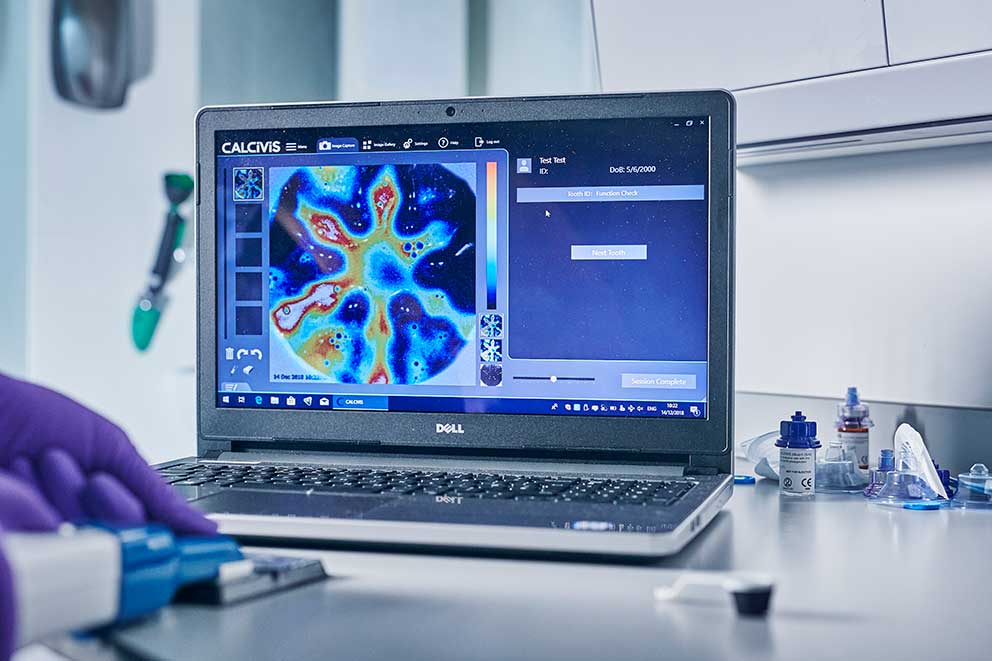 Where did the idea come from

“The initial idea for what would eventually become the CALCiViS imaging system came to me whilst I was attending the International Association of Dental Research meeting in Baltimore, in March 2005,” explains Dr. Longbottom. “I remember there was an afternoon devoted to filling materials which, as a cariologist, did not particularly excite me! So instead, I decided to spend the afternoon in one of the biggest Barnes and Noble bookstores I’ve ever seen, which was just across the bay from the conference.

“I spent a few hours in the Popular Science section, wandering down the shelves, until one title in particular jumped out at me. It was a book called Glowing Genes, and as I was flicking through the pages, the word ‘calcium’ caught my attention. Of course, calcium is the mineral lost when a patient has dental caries and, as I continued to read, I learnt that an agent had been developed which could help identify free calcium ions by stimulating luminescence. Interestingly, I had devoted a significant portion of my PhD to fluorescence and, while this is different to bioluminescence, it is close enough that I knew what the implications of this could be in caries detection. Essentially, during the caries process, the tooth’s calcium is being brought into solution, which increases its ionic concentration – meaning this luminescent agent would be able to, in theory, highlight active demineralisation.

“Of course, after seeing that, I bought the book and, after returning to Dundee, looked up the name of the professor who had been developing the calcium-detecting agent. You can imagine my surprise to learn that he was based in Edinburgh, about an hour and a half away from where I was working!

“Unfortunately, I never managed to contact the professor directly, but was instead directed to a company called LUX, which worked with the technology I was interested in. I bought some of their material and experimented with a number of teeth in my own lab – but, after a few disheartening attempts in the dark, could not produce the results I was hoping for.

“But I was sure that the technology would work, so I called the team at LUX again and asked if they could help me and they agreed to let me bring some teeth to their lab for imaging. Their set-up included a black box, in which they tested the bioluminescent agent, shielded from all ambient light. They also showed me that, since the reaction happened at an unfathomably fast rate, the delivery method had to be slowed down – necessitating a gel rather than a liquid solution (which is what I had been trying).

“The initial results were good – and incredibly exciting. We could clearly see a number of glowing areas that corresponded with where we had identified carious lesions, which was indicative of an increased concentration of calcium ions, such as you would expect in an active area of demineralisation.

“That was the real breakthrough moment. Over the course of my career as a cariologist I have looked into every different method for caries detection, from simple eyesight assessment to subtraction radiography, ultrasound and infrared – but none of these technologies could identify active lesions in the way this new technology seemed to be doing.

“Of course, we immediately repeated the experiment to make sure that we could duplicate the results, which we did. The next step was then to take a more scientific approach, to determine whether this technology could be given real clinical application – so an MSc student was employed to complete a more systematic review and analysis to confirm our initial success.

“Over the course of two years, she provided an incredibly detailed analysis of numerous teeth, studying the results at a micron level to determine the applicability of the technology. Ultimately, excitingly, she provided us with an almost unanimous answer: the technology worked.”